Most people already know these rules. In fact, I am pretty sure I knew these rules. However, it doesnâ€™t hurt to make them explicit, preferably before you might consider violating the following rules. With no further ado:

So, there are three simple rules, and helpful sub-clauses, to make attending a wedding simple and easy. I think Wedding Crashers would have reminded me about these rules but I was too lazy to ever see it. All I know is it is 8am, I just got three hours of sleep after drinking at least three pitchers of beer, and Iâ€™m currently waiting for my head to explode at the airport.

Note: this will surely be edited once I get home and am at least somewhat recovered 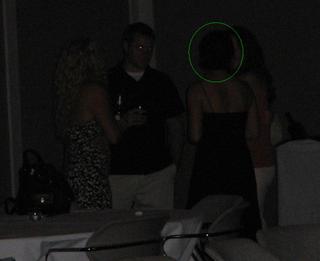 Follow-up:
I wrote this in the airport and Iâ€™ll keep it because itâ€™s almost funny. Here is a grainy digital photo of her back so that she remains safely anonymous on the internet. Since she’s in Minneapolis, I can safely have a giant crush on her without having to worry about running into her and trying to say something witty.

I talked to the groom this afternoon and I seem to have escaped without any permanent damage. Hopefully, the forty-five minutes I spent telling his parents how wonderful he is managed to cancel out the forty-five seconds of lewdness.